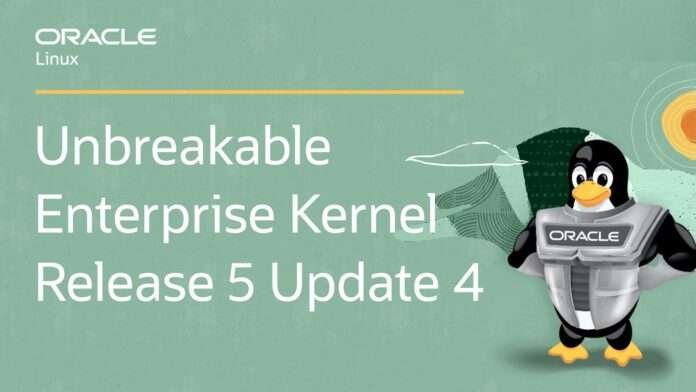 The Unbreakable Enterprise Kernel (UEK) for Oracle Linux provides the latest open source innovations and key optimizations and security to enterprise cloud and on-premises workloads. It is the Linux kernel that powers Oracle Cloud and Oracle Engineered Systems such as Oracle Exadata Database Machine as well as Oracle Linux on 64-bit Intel and AMD or 64-bit Arm platforms.

The Unbreakable Enterprise Kernel Release 5 Update 4 (UEK R5U4) is based on the mainline kernel version 4.14.35. Through actively monitoring upstream check-ins and collaboration with partners and customers, Oracle continues to improve and apply critical bug and security fixes to UEK R5 for Oracle Linux. This update includes several new features, added functionality, and bug fixes across a range of subsystems.

For more details on these and other new features and changes, please consult the Release Notes for the UEK R5 Update 4.

A full list of CVEs fixed in this release can be found in the Release Notes for the UEK R5 Update 4.

Oracle Linux can be downloaded, used, and distributed free of charge and all updates and errata are freely available. This allows organizations to decide which systems require a support subscription and makes Oracle Linux an ideal choice for development, testing, and production systems. The user decides which support coverage is the best for each system individually, while keeping all systems up-to-date and secure. Customers with Oracle Linux Premier Support also receive access to zero-downtime kernel updates using Oracle Ksplice.

UEK R5 Update 4 is fully compatible with the UEK R5 GA release. The kernel ABI for UEK R5 remains unchanged in all subsequent updates to the initial release.

Oracle Linux is an open and complete operating environment that helps accelerate digital transformation. It delivers leading performance and security for hybrid and multi cloud deployments. Oracle Linux is 100% application binary compatible with Red Hat Enterprise Linux. And, with an Oracle Linux Support subscription, customers have access to award-winning Oracle support resources and Linux support specialists, zero-downtime patching with Ksplice, cloud native tools such as Kubernetes and Kata Containers, KVM virtualization and oVirt-based virtualization manager, DTrace, clustering tools, Spacewalk, Oracle Enterprise Manager, and lifetime support. All this and more is included in a single cost-effective support offering. Unlike many other commercial Linux distributions, Oracle Linux is easy to download and completely free to use, distribute, and update.

Apple expands the use of recycled materials across its products